The SWMENA survey  investigated the extent to which women in Lebanon felt they enjoyed freedom of movement without pressures from family or society. The survey also examined general attitudes towards violence against women and whether domestic violence, in particular, is tolerated or rejected by society. These topics were covered in an attempt to understand power relations within the family and within society in how it views women.

Women’s ability to move freely and safely in public spaces supports their ability to fully participate in the civic, political, and economic life of their communities. Therefore, women in Lebanon were asked how free or restricted they felt in associating with persons of their own choosing; expressing their views on critical issues to family members, neighbors or friends; leaving their house without permission; and moving about in public areas without fear or pressure. 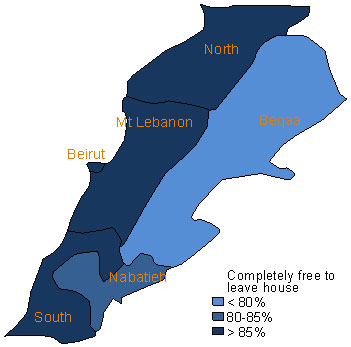 The workplace is one specific public setting included in the survey where Lebanese women might experience harassment. Survey respondents were asked, “When you are at work, how often would you say that men make unwelcome physical contact, noises, comments, or gestures toward you or other women?”